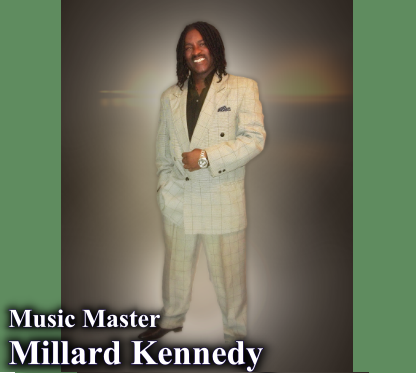 Millard Kennedy is The Maestro. He’s a native of Shreveport Louisiana with rich ties to everything musical that pours from that area.Miller Kennedy is the go-to if you want to know anything about good music. He feels every note he plays and he makes sure his audience feels it too. He has supported numerous artists with music, artist development, showmanship and encouragement. He’s work with several people over the years such as Johnny Taylor, Mocha Blue Blaze, Lattimore Brown Ted Taylor, Donell Jones, John Kay Stephen Wolfe, Buddy Ace, Buddy Flint, Ice Cube, Jimmy Witherspoon, TK Soul, Carl Sims, Millie Jackson, and many more. One of his most favored accomplishments is the mentoring and artist development of the popular group Profyle which included two of his sons and two other relatives. The group Profyle was signed with Motown and very popular back in the 90s. Mr. Kennedy has a wealth of talents. He is a producer, he plays several instruments, he’s a rapper, singer, visual artist and he is also an actor. He’s appeared in motion pictures such as The Soul Man and Mad Money. This renaissance man has a wide range and it seems to be growing.
He’s always open to help. So if you’re an artist of any kind, Mr. Kennedy is someone you will want to work with.