Arizona State football made it through one season with three true freshman quarterbacks, but the seemingly inevitable happened Monday.

Joey Yellen, who started and played well against USC, announced he is transferring.

“Arizona State is a special place with great people,” Yellen wrote in a social-media post. “I will leave with nothing but love for this program.” 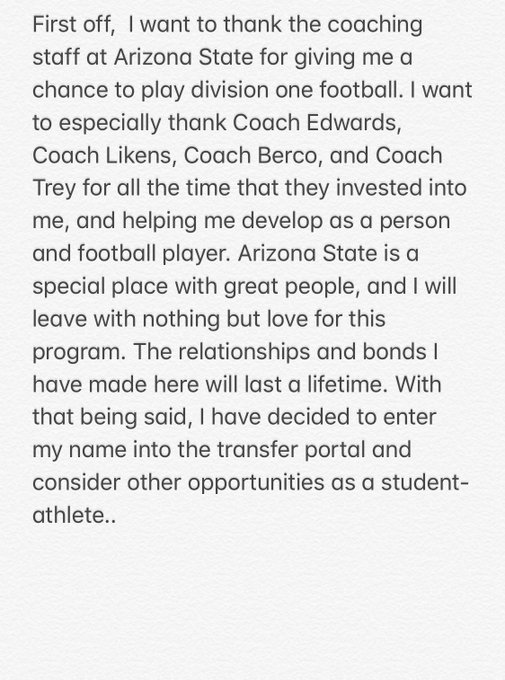 189 people are talking about this

Yellen backed up Jayden Daniels during a 7-5 regular season other than against USC when Daniels was out with an injury. Without Yellen for the Sun Bowl on Dec. 31, true freshman Ethan Long will return to quarterback to back up Daniels. Long has played most of the season at wide receiver and on special teams.

“It doesn’t catch me by surprise,” ASU coach Herm Edwards said after ASU’s first bowl practice. “I had a great conversation with Joey yesterday. I told him if it doesn’t work back, he’s always welcome to stay here. He’s going to weigh his opportunities.

“You could just see it. I’ve been around this a long time. That’s why we brought in three quarterbacks because we felt like if the starter becomes a freshman, it’s going to be hard for guys to sit and watch another guy play. That’s why we have to bring in a quarterback every year because you never know what’s going to happen in that room.”

Are you a sports fan? Stay in the know. Subscribe to azcentral.com today

Yellen said the decision was not easy. He said he is particularly close to his teammates, having furthered a bond when they supported him through the unexpected death of his brother the past summer. He does not regret making ASU the first stop in his college career.

“I don’t regret it at all,” he said. “I have grown a lot as a person and as a football player in my time here. Everybody here helped me through a very difficult time and it does make it that much harder to leave. After thinking it over I really think it’s for the best.”

Yellen said he filled out paperwork Sunday night and went to the compliance department Monday to take the necessary steps to facilitate a move. He talked to quarterback coaches Mike Bercovici and Trey Anderson late last week but didn’t get to Edwards until Sunday. Edwards was out on the recruiting trail, and Yellen wanted to do it in person and not on the phone.

Yellen, out of Mission Viejo High School in Southern California, said he isn’t even sure how the whole transfer process works. He thought about staying with the Sun Devils through bowl preparation, but after discussing it with Edwards, felt now was the time to go because the sooner he can get his name out, the sooner he can find a landing spot. He would like to start the next semester in another program, so he can make the adjustment and be eligible for spring ball.

Get the Sports Breaking News newsletter in your inbox.

Yellen started thinking about making the move after the success he had in the USC game.

“I’ve never been short on confidence,” he said. “But just going through that game and playing pretty well, it was like, `Ok, I can do this.’ “

ASU currently does not have a quarterback in its 2020 recruiting class after the decommitment of Blake Shapen, who also planned to play baseball. Early signing day is Wednesday with another signing period in February. The Sun Devils also potentially could add a grad transfer quarterback.

“I can’t mention names, but we’ll be OK (at quarterback),” Edwards said. “We’ve got some guys lined up. We’ll have enough quarterbacks in here when the spring (practice) starts.”

Edwards said he does not think ASU’s change in offensive coordinators – from Rob Likens to newly hired Zak Hill – was a factor in Yellen’s decision.

“He’s a little bit torn right now,” Edwards said. “He’s got a lot of friendships here and he’s really close with Jayden. I understand, I don’t take it personal. I see it happen at a lot of place. That’s the nature of it now with the (transfer) portal. That’s free agency for college football players.”